In 2002 the price of coffee reached a 30 year low. These photos are testament to the hardships faced by all those living in coffee growing communities at that time in Nicaragua. In communities where workers had not been paid in months even years, where malnutrition rates for children reached up to 50% in some areas, and small landholders were forced to sell of their land. 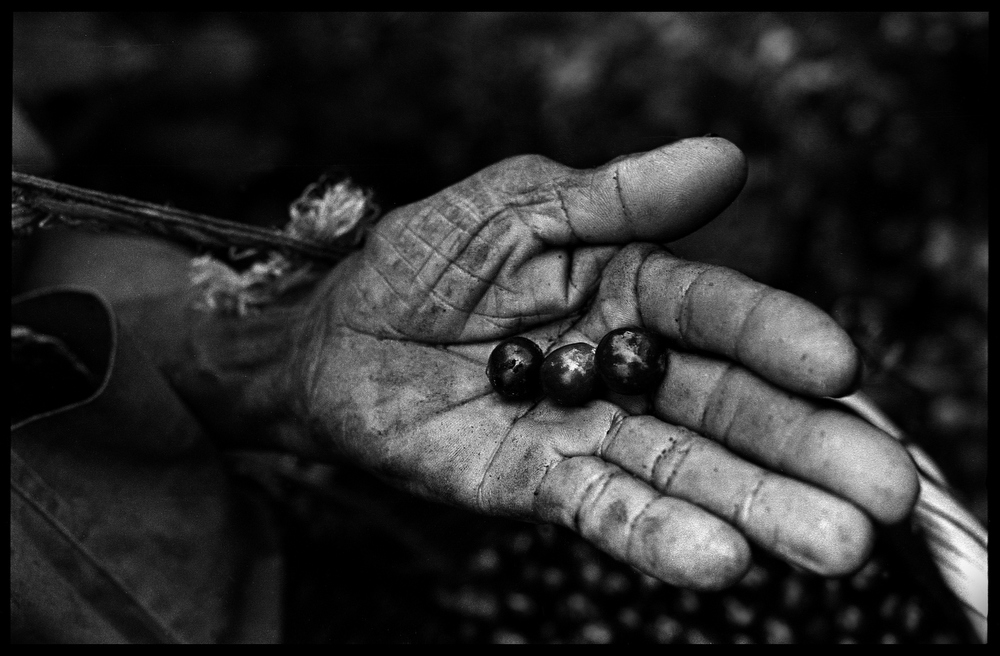 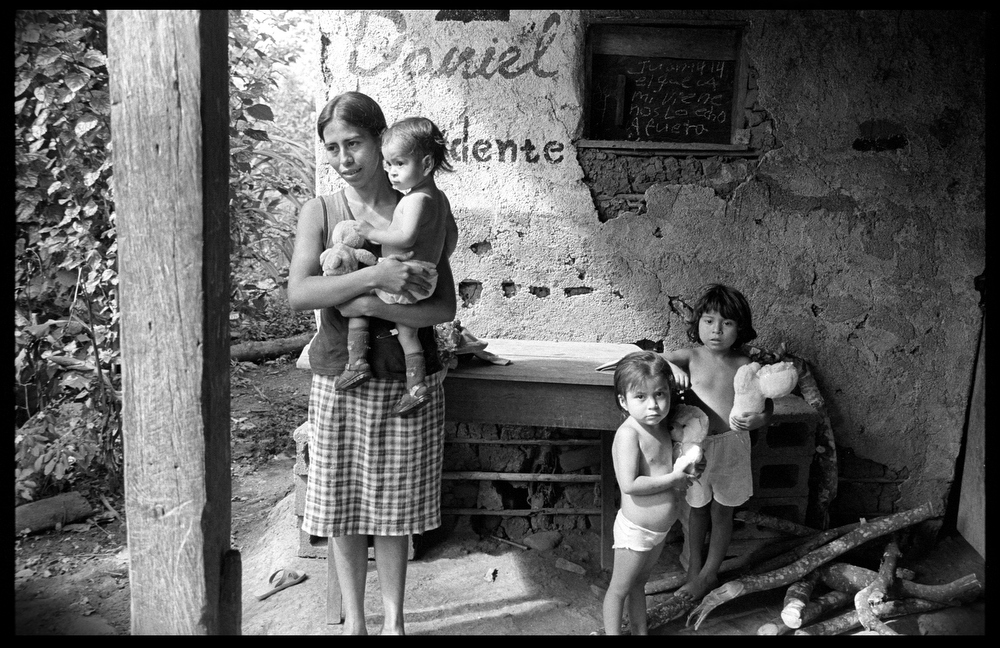 A mother hold her 13 month old daughter Noemi. The child weighs 7.5 kg and suffers from acute malnutrition. Her two other daughters, Blanca, 6, and Ileana, 4, also suffer from chronic malnutrition. Her problem is like many others in the community of Pacayona in Yasica -Sur, Matagalpa; the closest health center is one and a half hour walk away and so many kids don’t see doctors untill the situation is dire. 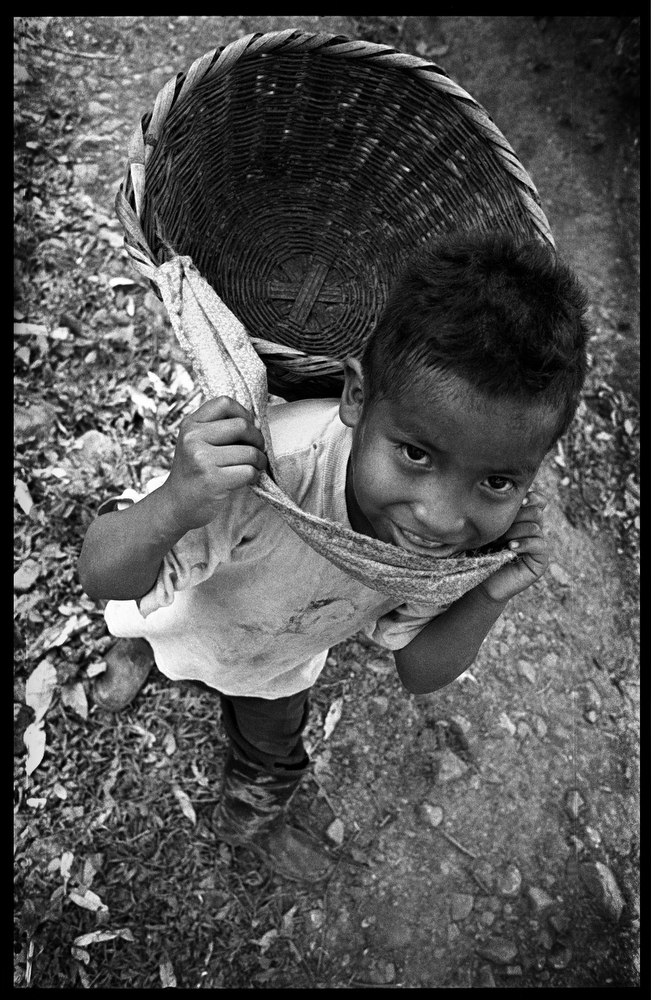 Freddy, a 6 year old on his way home from working in the coffee fields in the community of El Carmen , Matagalpa, Nicaragua. 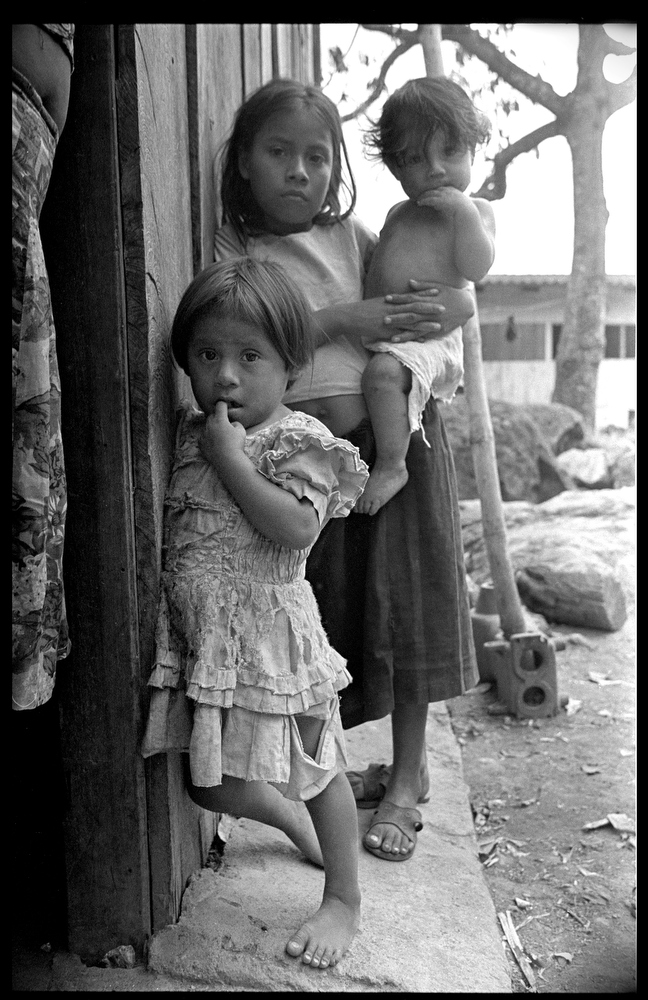 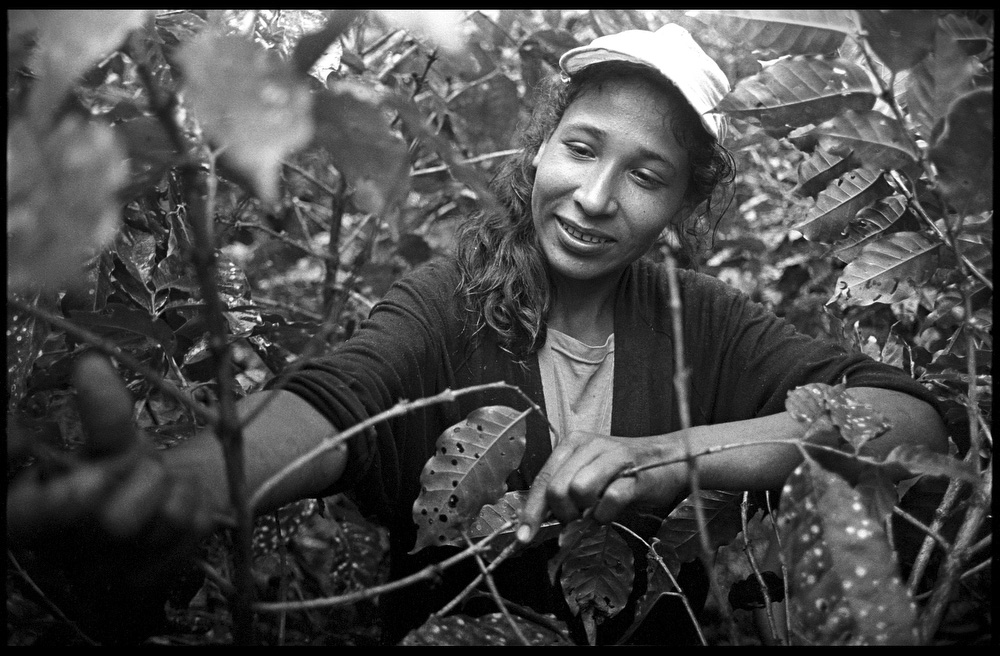 Santa, 19, a worker on La Corona farm, has been picking coffee since the age of 7. 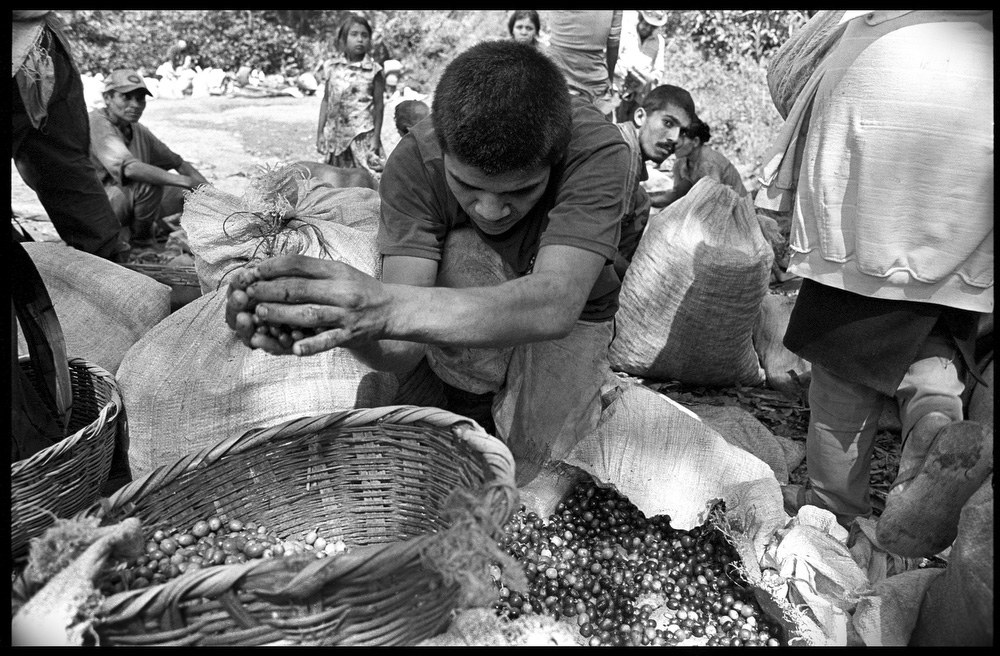 A worker seperates green beans from ripe coffee beans on the roadside between El Tuma and La Dalia, Nicaragua. 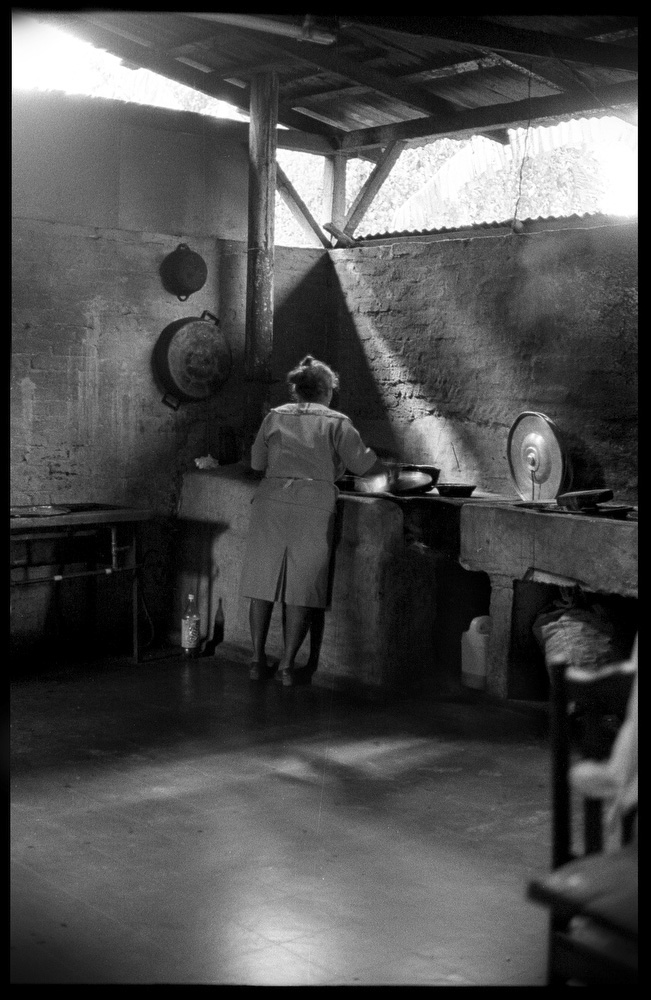 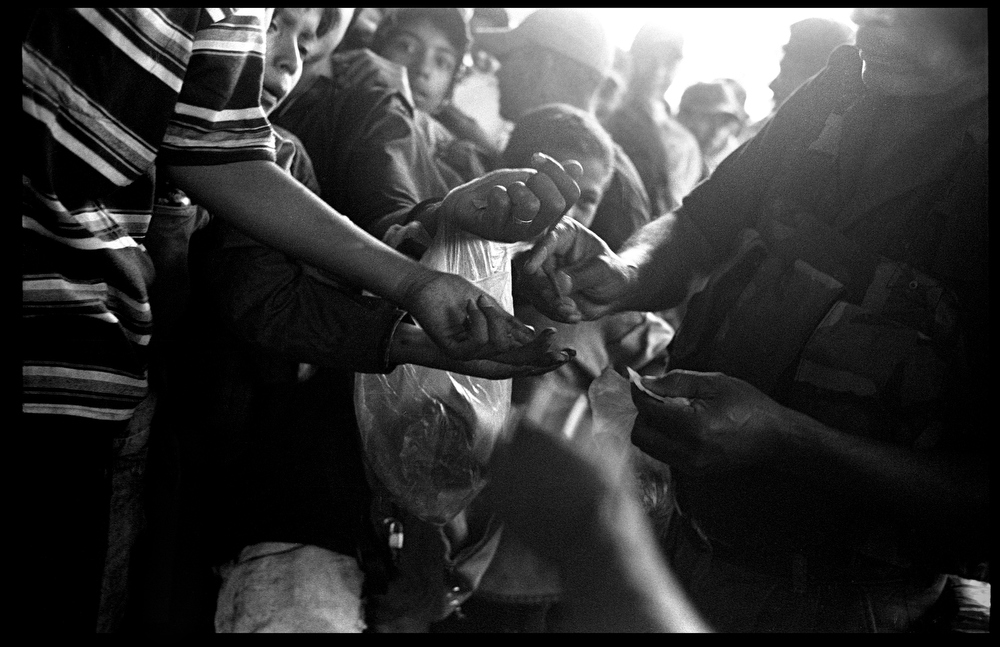 Line up for food outside a plantation in Matagalpa, Nicaragua. Workers of all ages get one coupon representing one meal and one drink. The coupons are to discourage workers from getting in line once more. The average plantation feeds its workers a bowl of rice, a tortilla, and a serving of beans. 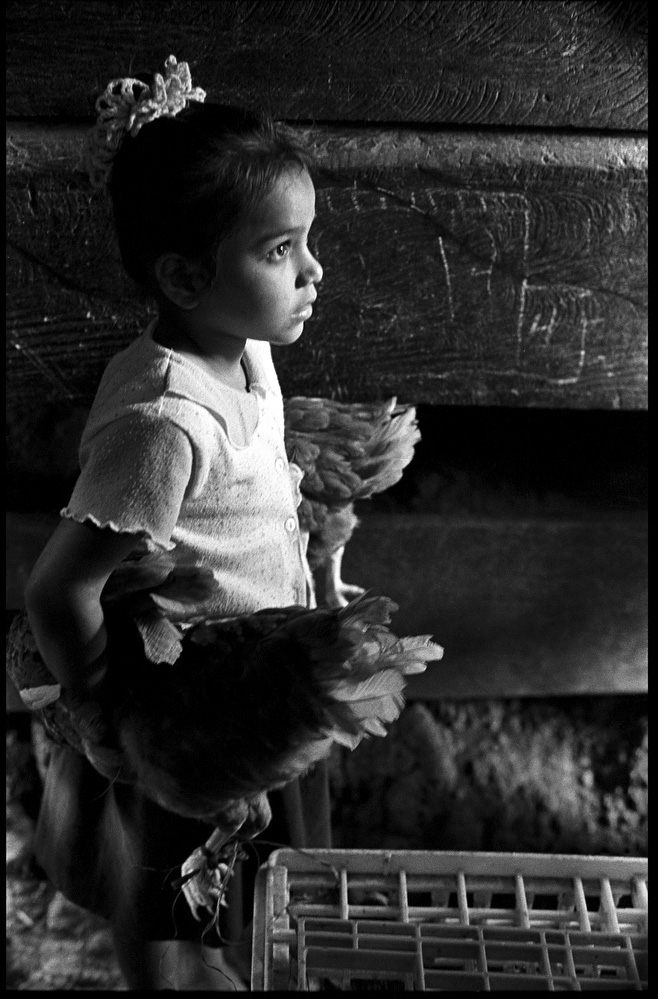 A sharecroppers daughter in Matagalpa, Nicaragua. The families of this patricular community had received seeds, and chickens as part of an aid package administered through CARE. 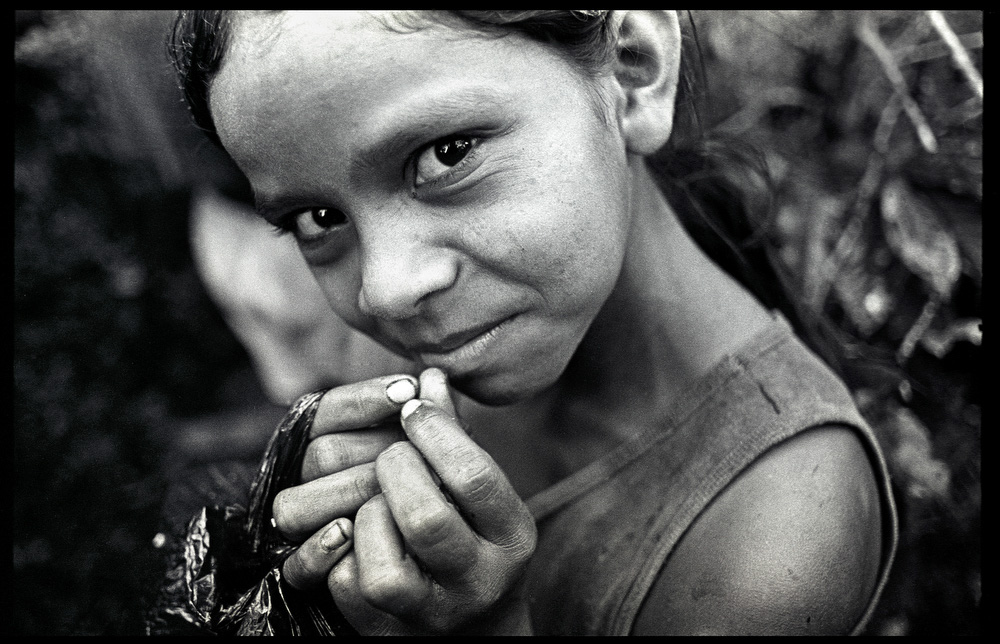 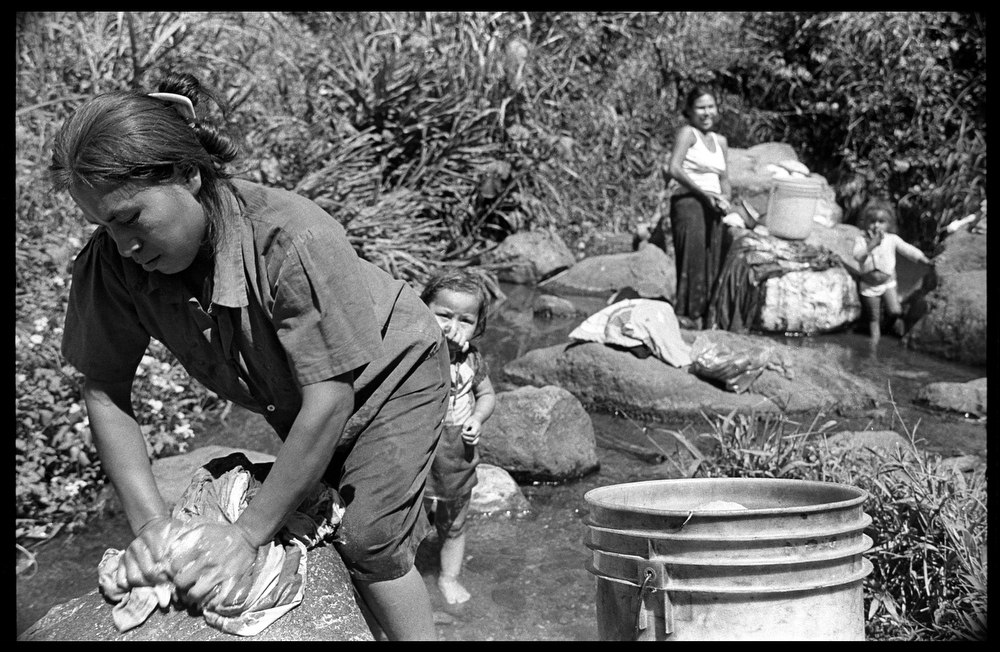 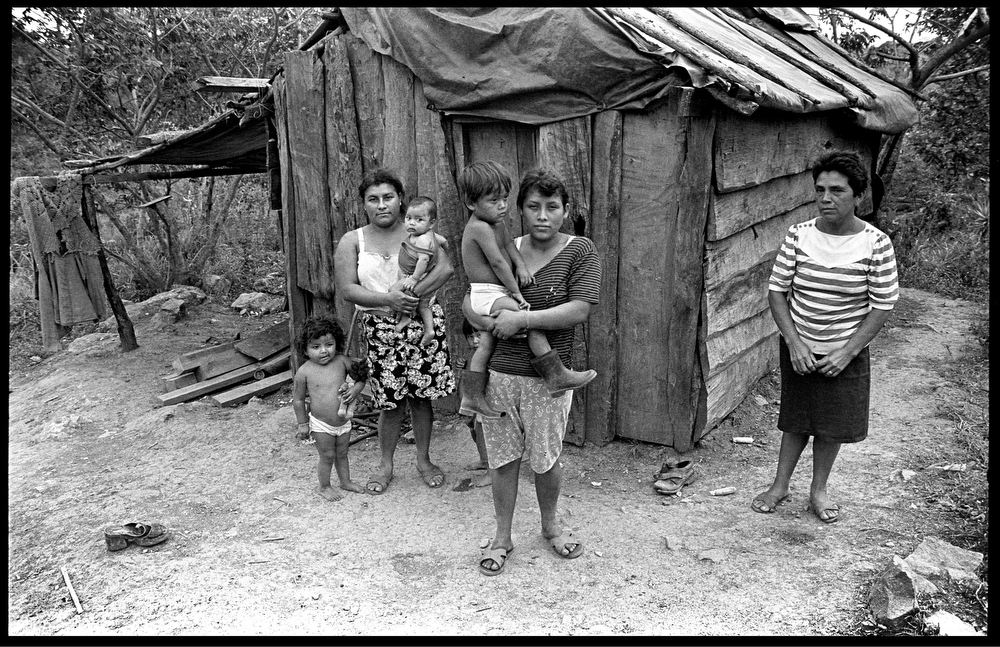 Gloria Cruz Hernandez, Cecilia Sanchez Alarcon and Esmeralda Montoya Perez, Matagalpa , Nicaragua. All they own is a little home like the one behind them. These ladies had taken part in the “plantones” (unemployed coffee workers had lined alongside highways, and gathered public squares ). Government had promised some land to workers who would return to work for aproximately 2 US $/day. But 6 months later they had still not received any land nor any of the health or education centers that were promised. 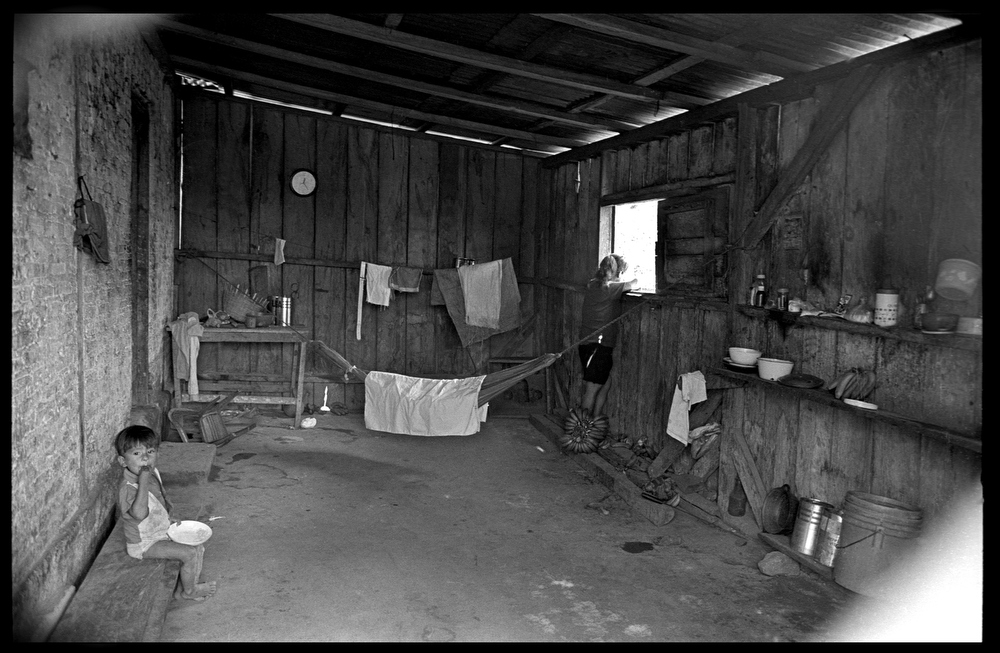 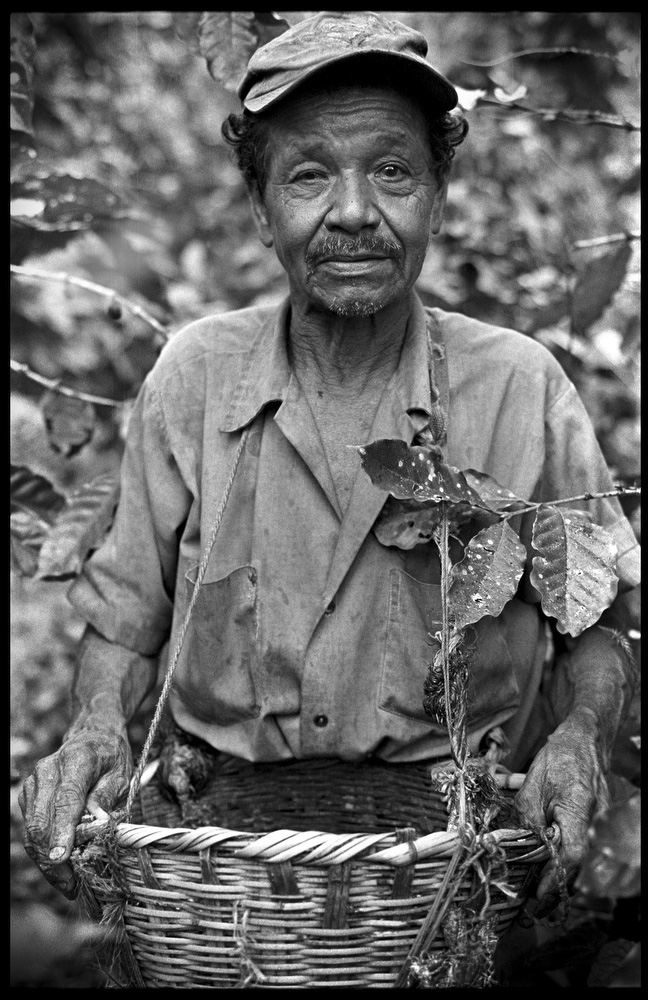 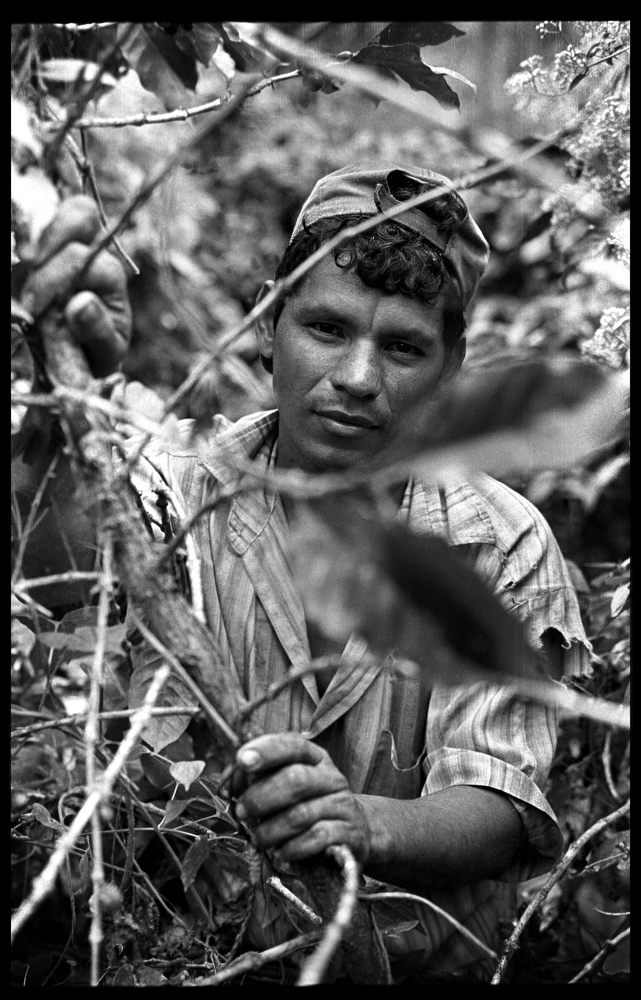 Wilmer Luna, 13, a coffee picker on La Corona farm. From the ages of 6-12 Wilmer cut and gathered wood. The teenager has never attended school. 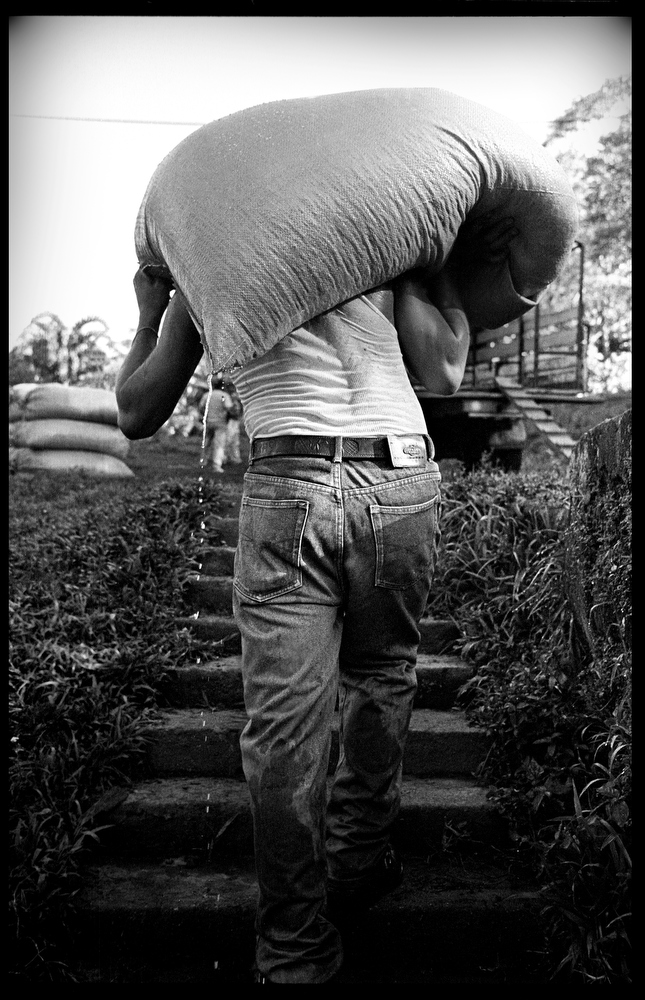 A worker on Lucha y Providencia carries a 100 pound bag on his shoulders. Workers here have not seen a pay for the last three years. The situation is similar on many plantations where the owners have abandoned the farms, and the workers are battling for ownership. 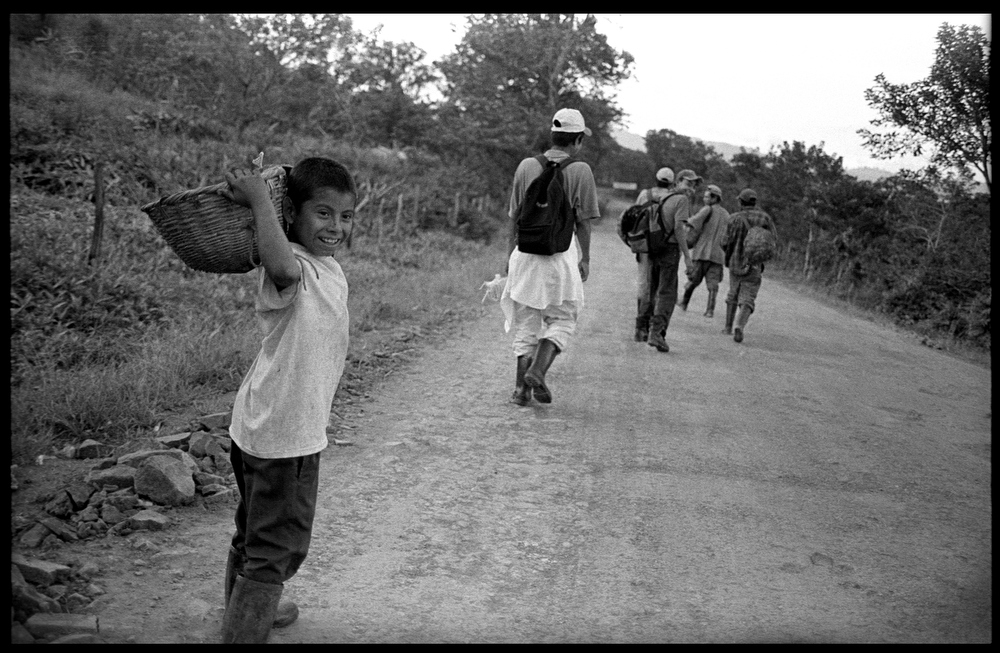 Coffee workers on their way home after a day’s work. Matagalpa Nicaragua. 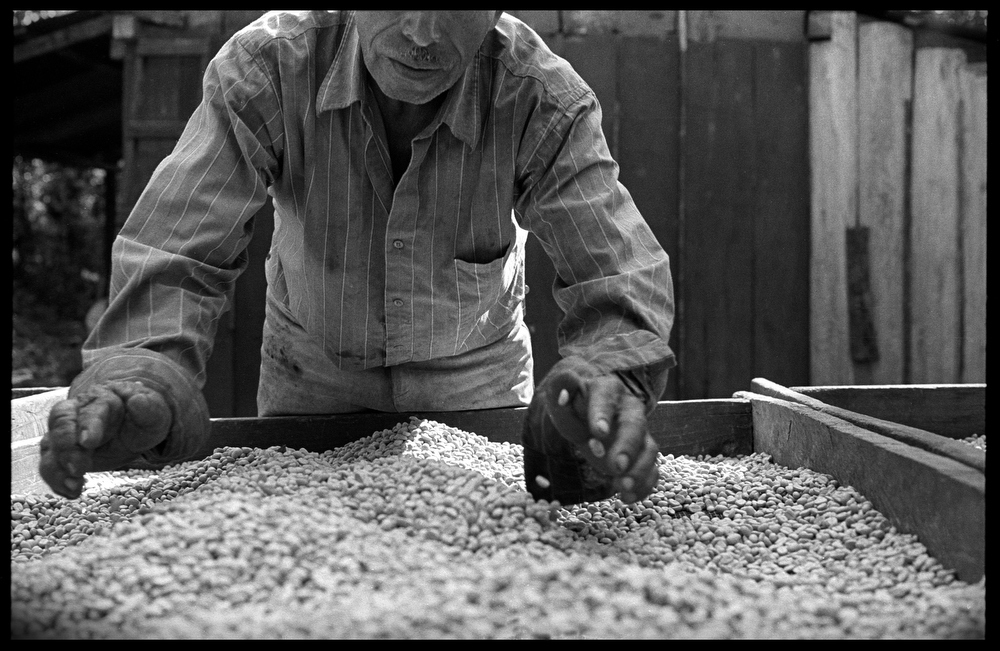 Bernabe Rodriguez Cano,55, has been farming organic coffee for the last 5 years. His 9 acre farm allows him to self sustain himself and hire some workers during the high harvest season. Organic coffe can fetch up to double the price per pound of traditional non organic coffee. 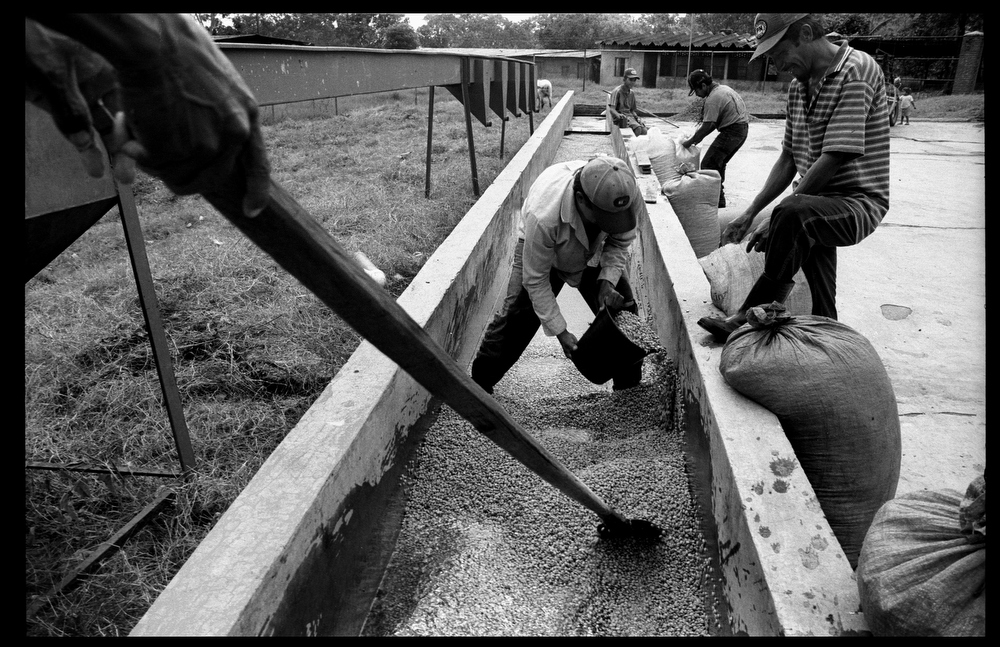 Workers on San Antonio plantation (municipility of La Dalia, Matagalpa) clean and bag coffee beans. These workers have been in a legal battle for some years after the owner declared bankruptcy. The workers are waiting for one year back pay. The 60 odd families now run the farm as a co-operative after the owner abandoned the farm in the year 2000. Nicaragua. 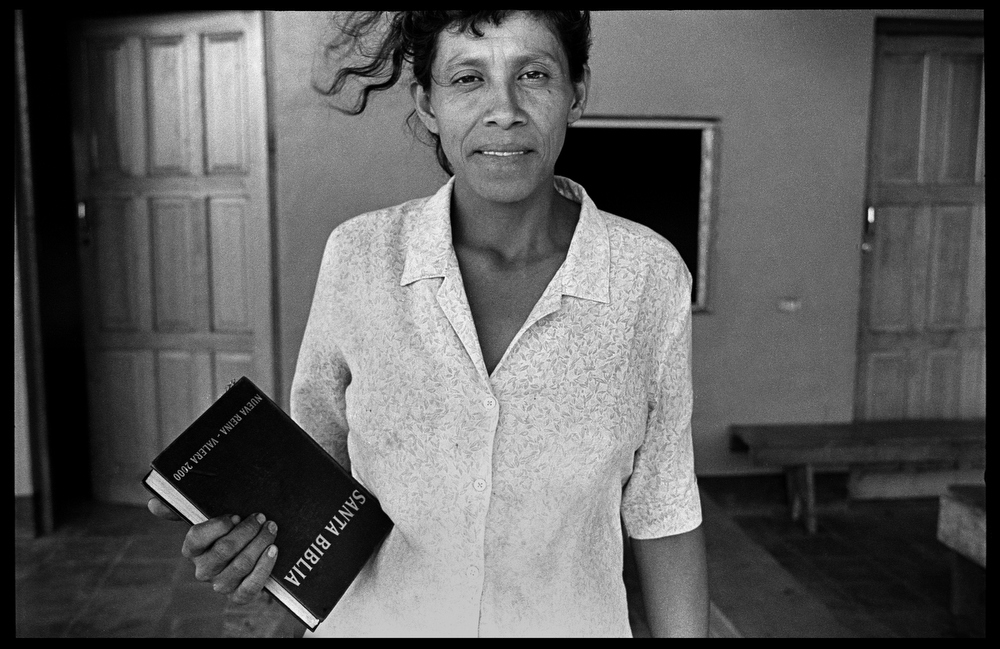 A woman on La Golondrina farm finds solace in her bible. She is pictured here in front of the recently built evangelical church on the plantation. Religion plays an important role for many coffee workers.