A selection of portraits and testimonials form pesticide affected banana workers and ex-workers.

Workers on banana plantations were affected by a nasty pesticide known as Nemagon. Nemagon, a virulent pesticide (derived from DCBP)  was used on banana plantations in Nicaragua, and other countries in Central America. Though banned in the US since 1979 Nemagon was exported throughout the 60s, 70s and 80s. The pesticide was produced by Dow and used by US companies such as Dole, Del Monte and Chiuquita.

As a result it is estimated that 22 000 Nicaraguans are afflicted with Nemagon-caused diseases and disabilities. The Association of Workers, and Former Workers (ASOTRAEXDAN) has helped those suffering and helped file legal suits on behalf of the plaintiffs. 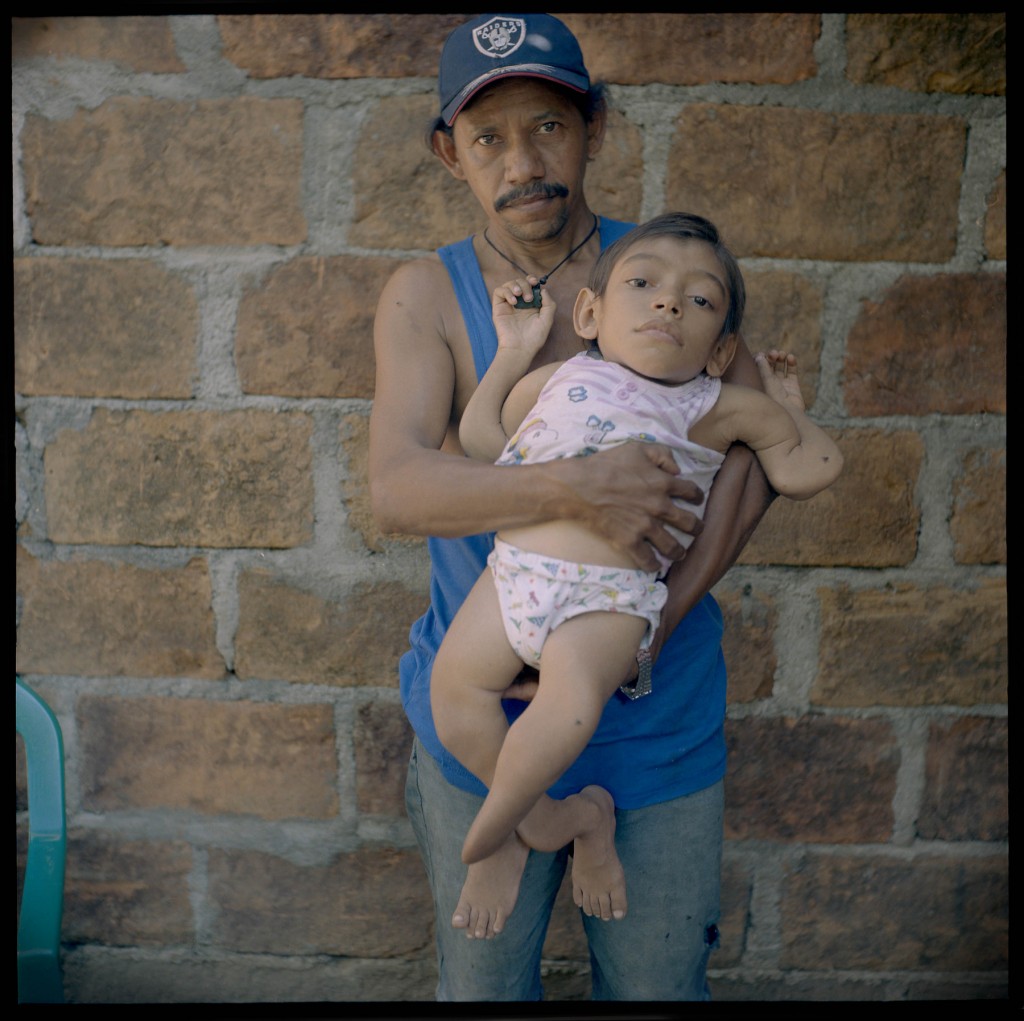 Chinadega, Nicaragua, Roberto Peralta Guitterez, 43, and son Roberto Francisco Peralta Salgera, 10.
Roberto worked for three years (1977-1981) on plantations in Chinandega. He claims when the pesticide was sprayed, it burned all wild weeds that would grow in the banana fields. He was also responsible for loading and packing, and carrying the fruit from the farm to the packing station. His eyesight is diminishing, suffers from severe headaches, and pain in his bones. Roberto had two other sons who were born in a worse condition than Roberto Francisco, but died at young ages. Roberto Francisco has severe joint disfiguration, and severely stunted growth. 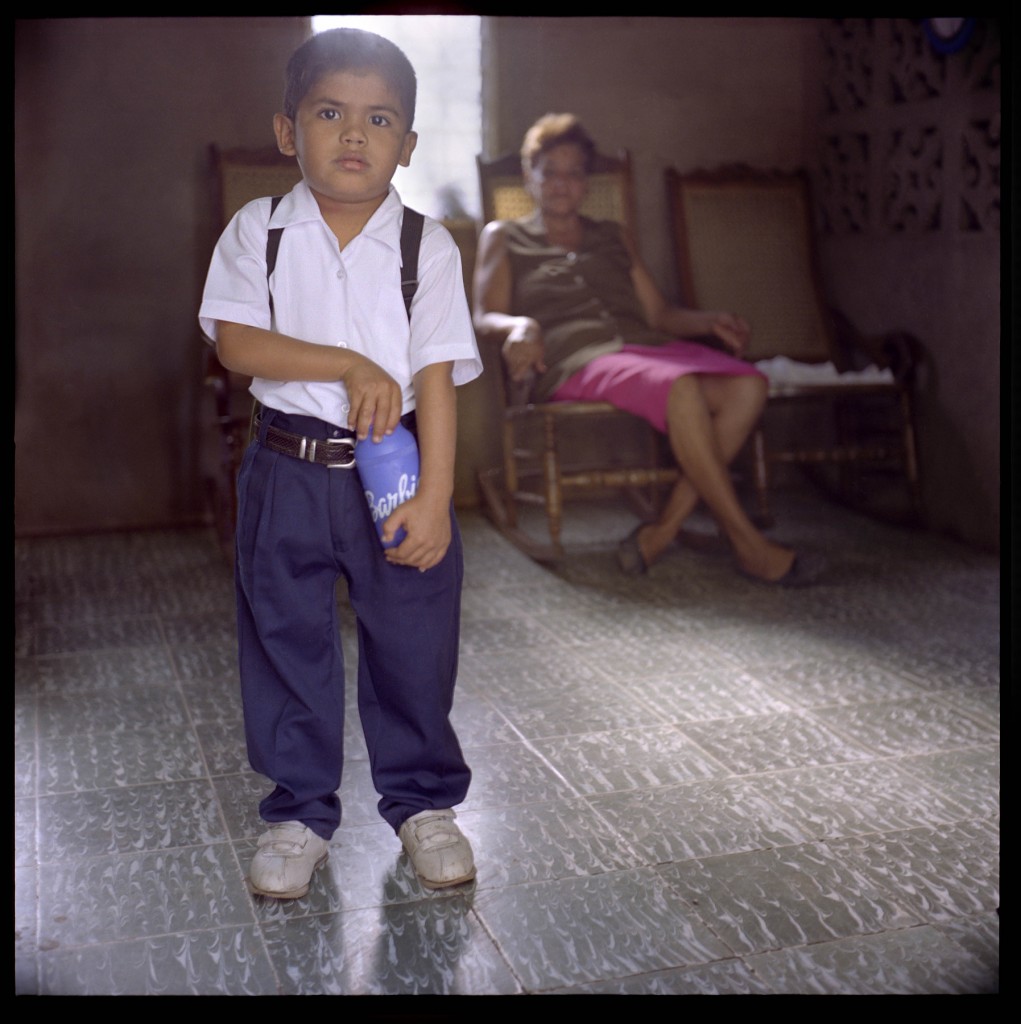 Ranchería, Nicaragua. Yonathan Cabrera Cañado, 4.
His mother Milena Cañado worked from 1974-1981 in banana plantations. Milena says the two kids that were born before she was working on plantations were born “normal”. Yonathan seems okay, except he was born without a penis, as well as deformed belly button. Milena Cañado claims that, apart from being exposed to the pesticide through irrigation, and contacted with the bananas, workers would drink DCBP contaminated water from the wells, as well as eating bananas directly off the trees. 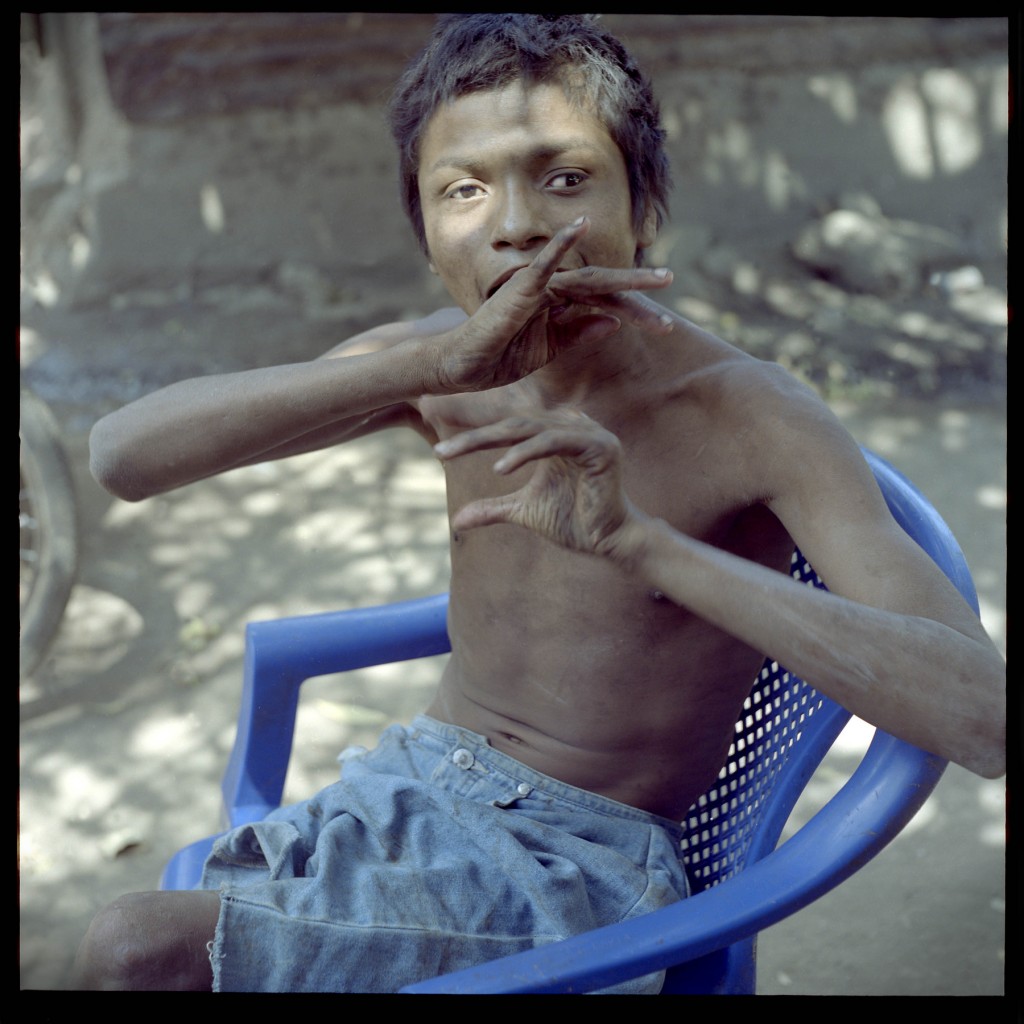 Chinandega, Nicaragua Juan Carlos Briseño, 27.
Juan Carlos suffers from severe psychological and physical problems. His mom worked in banana plantations for 15 years. She was working there when he was born. Juan Carlos eats little and can’t speak, nor walk. He sits in a chair all day or lies in a hammock, and only drags himself along the ground. The family is too poor to be able to afford any of his medical expenses. 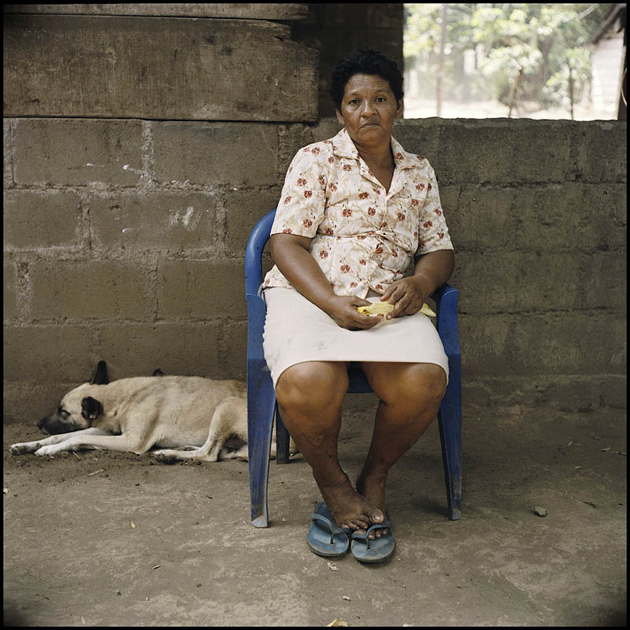 Chinandega, Nicaragua Francisca Picado Briceño, Pesticide affected woman, 47.                               Francisca mother of Juan Carlos worked on plantations for 15 years. She suffers from bone pains; she is slowly losing her sight and hasn’t worked in 9 years due to headaches, and the pain in her bones. The woman has 6 children, of them, one died at age 13, one is “slightly crazy” as she described it, and Juan Carlos, who suffers from severe psychological and physical problems. Her job on the farm was to fertilize the bananas, weigh them, package them, separating bunches, in all accounts she was constantly touching and handling the pesticide infected bananas. 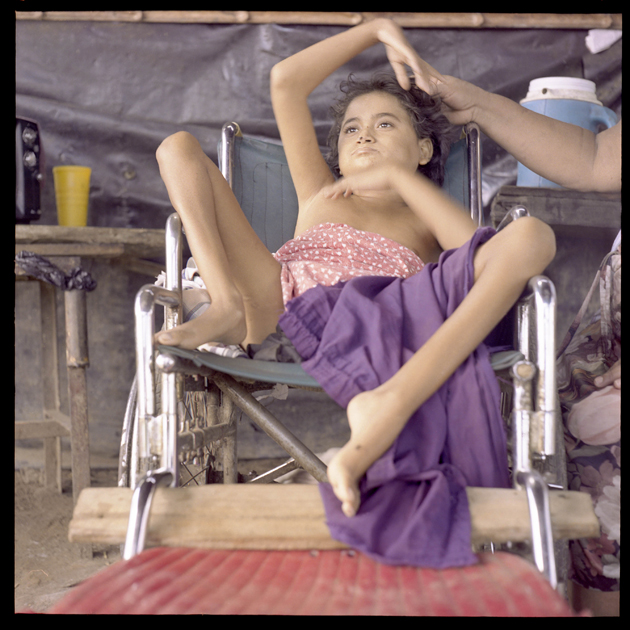 Chinandega, El Viejo, Nicaragua Ana Maria Romero, 13.
Ana Maria Romero Mendoza sits in her broken wheelchair looking over yonder. The girl survives on the medication she is given for her many ailments. Her mother, Flor de Maria Mendoza and husband Jose Medardo Romero Medina care for their daughter. The couple worked in the banana fields in the seventies, they had 5 children four of which died. Ana Maria suffers from psychological problems; she can’t speak, nor walk, or hold on to anything. Her bones are weak and fragile. She needs medication to keep down the inflammation of her liver, and spleen, as well as for fevers, pneumonia, and diarrhoea. The family is in much debt due to borrowing for any hospital or medical expenses. 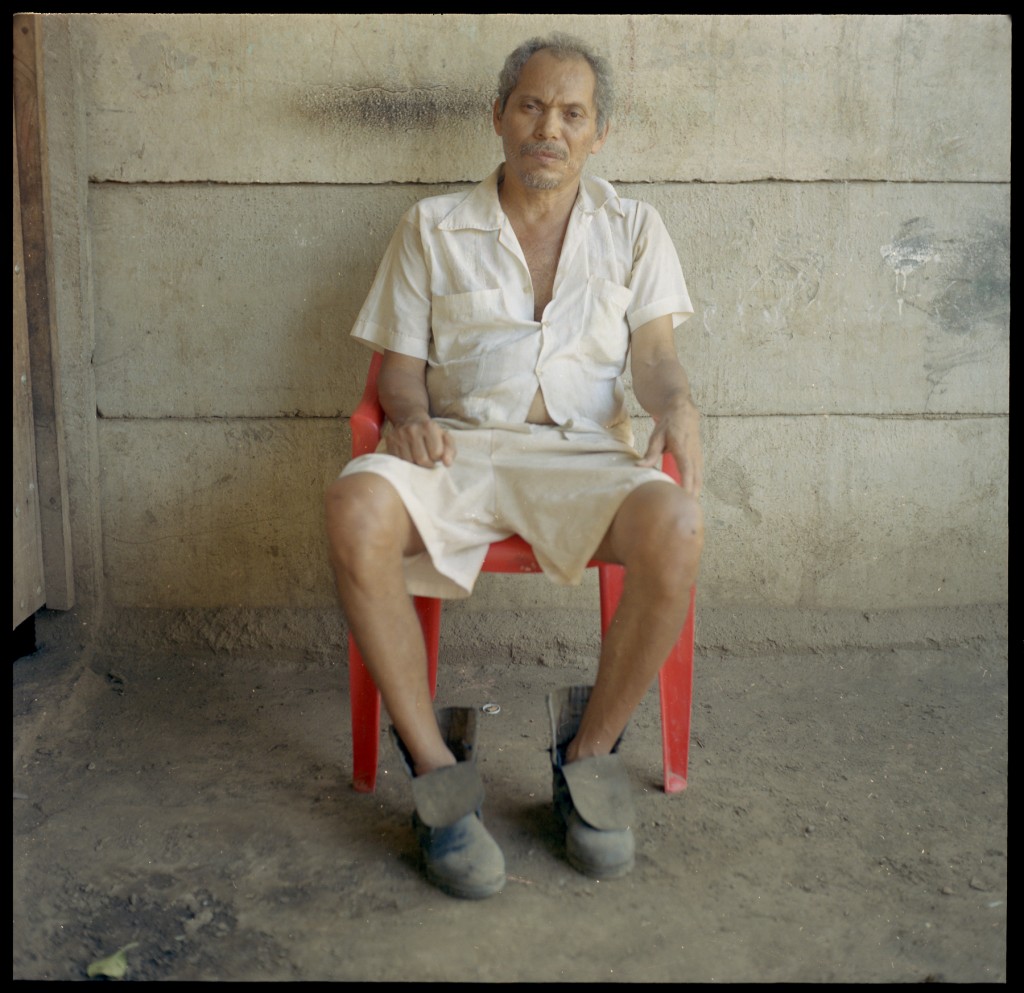 Chinandega, Nicaragua José Miguel García Alemán, 55.
José Miguel worked from 1985-1992 on a banana farm in Chinandega. He had jobs ranging from weeding the plantations, to picking the bananas, loading and packing. José has two sons who have physical ailments and he himself suffers from a nervous system disorders that has him shaking constantly. His knees are in constant pain, and his toes sometimes clench involuntarily. He goes from his bed, to this chair, and from the chair to the bed. He wouldn’t be able to do this without someone’s help. He stopped working in ’92 due to the symptoms. 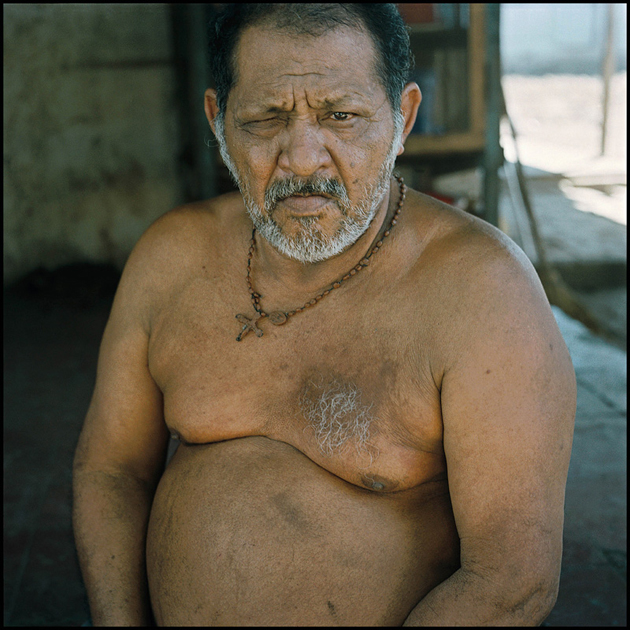 Chinandega, Nicaragua Cofme Zepeda, Nemagon affected worker.
Cofme says workers didn’t know about any dangers due to the chemical not having any offensive smell. Being a foreman, Cofme lived on the farm and claims when they would spray pesticides everything surrounding his home would be wet with the pesticide, and dry to a crusty white. His wife died, and by the end of her life was bald and suffered from kidney complications. Cofme gets cists very often, his hands swell up, and he can’t see from one eye. His throat neck, back and hips hurt. Two of three kids have very brittle bones, and the third suffers from retardation.